It seems I have been on a bit of an unplanned break.
Friday was going to be my glorious return to the track for tempo. You see, I’d had it all planned out. Three weeks off after Goofy, followed by two weeks of easy running to get my legs back into it. Then a week or two of tempo only before jumping back into full on training. Cherry Blossom Ten Miler on April 1 and then gunning for a big half marathon PR in early May. Except as you all know, life doesn’t always happen quite as we planned. Sometimes, it seems like the more I plan, the more the universe feels the need to tell me I’m not really in control.
I more or less avoided mentioning it here on the blog, but while training for Goofy I started to have pain in my butt when I was running. It was only on the right side and it was worse when I ran faster. The only time I went to a tempo workout it was radiating down into my hamstring. After consulting Dr. Internet, I was pretty sure that I was dealing with a piriformis issue. I knew I was running Goofy regardless, so I just stuck with easier runs during those last few weeks of December since my only goal was to finish. I figured that my body was just tired and overworked since the way I had scheduled things didn’t leave for much of a break after Philly. I was optimistic that my three week post-Goofy running break might be all I needed to get back to normal. As a precaution, I added a few piriformis strengthening exercises and stretches to my daily routine and kept my fingers crossed.
Unfortunately, as soon as I returned to running, the pain was back. It wasn’t the whole time that I was running and it wasn’t all that painful, but something was most definitely off on my right side. A week and a half after starting running again, I finally acknowledged that this wasn’t something I could (or should) keep ignoring. So I got the wheels rolling in the over-complicated process that is health insurance and referrals and got myself to a PT for an initial evaluation. The diagnosis? A lazy, non-firing right glute muscle. As a result, there are a lot of other muscles in my upper leg/butt that are compensating and working too hard, including the piriformis.
I’m now in week two of PT and learning how hard it is to activate a specific muscle, especially when it’s one that been lazy for a while. The first day for almost every exercise I heard, “Nope, hamstring. Try again. No, you're using your hamstring again.” Fortunately, I feel like I’ve made some progress, though I know it’s going to be a slow process.  The regular stretching of  my incredibly tight hip flexors, piriformis, etc. has definitely made a difference already.  I’m also trying to (finally) be more diligent about foam rolling.
Since I wasn’t sure how I would feel after Goofy, I purposely didn’t sign up for many races.  Although I had a number in mind, the only one I committed to was Cherry Blossom, and that was only because the lottery was held in December. I'm still doing long runs, so I have no concerns that I won’t be able to run Cherry Blossom.  I’m just not sure if it will end up being an easy long run or, if I’m lucky, a tempo effort. The half may not happen. I’m not registering for anything else until I have this all sorted out. I won’t lie and say that I’m not disappointed. I am.
I know that in the grand scheme of things, this is a relatively minor issue. It’s one that is fixable and I will be able to get back to running the way that I was last fall. And I don’t even have to stop running while I get everything figured out (though I am avoiding any speed work since the pain is definitely worse as the pace picks up). So there are a lot of positives to the situation, but for now I’m still feeling a little cranky about it. I was really looking forward to getting back to CAR workouts and training hard.  For someone who ran by herself 95% of the time until last fall, I quickly learned how much I enjoy running with other people. One of the most frustrating parts about all of this is that I'm not going to return to the track until I've gotten this fixed, so I’m left doing a lot workouts alone.
If I think about it logically, I know that I have plenty of time to train hard and run fast. And I know that all that time only exists if I fix this now. So that's what I'm going to do. And with no more whining or complaining since it does nothing to help the situation or speed up the process.
Posted by Allison at 10:34 AM 12 comments:

New gear: Newtons! With my 3 week running break I haven't had a chance to run in these yet, but I'm really looking forward to working them into my shoe rotation in February! 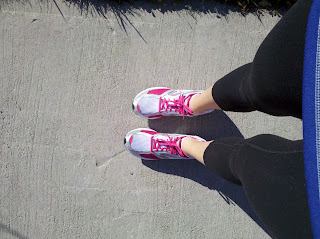 Workout goals:
Smart recovery from Goofy - I got through my 21 day run break and am excited to get back to running. I think the break was good for me physically and mentally.

Mix things up during my running break - I managed a steady rotation of elliptical, pool running and swimming.  I also started doing planks on a semi-regular basis.

Swim - I got myself back in the pool and am on my way to getting back in swimming shape!

Non-workout goal: Clean start to 2012 - I tackled 2 of the 3 closets in my apartment but I still have a ways to go.  Still, I got rid of a ton of stuff including a VCR, phone and answering machine.  Not sure why I've been storing this stuff for years!


I'm very happy with how January turned out.  I kicked it off with races that I had been looking forward to doing since I ran my first marathon back in 2009 and had a blast running both of them.  It was also a lot of fun to spend time with a friend who I hadn't seen in a while and visit Disney World for the first time in my life. During the rest of the month I spent more time at the pool than I probably have in the last 6 months combined.  There were lots of easy "running" miles in the pool and I kick-started my swim training for the 70.3 relay in May (it is nice that I am only responsible for 1.2 of those miles!).  The first two weeks off from running were great, but the third one was hard.  By that point it was a challenge, so I had to make it through all 21 days!  While I know there were a lot of physical benefits to taking this running break, right now I feel like the biggest benefit was mental.  I went from feeling burned out before Goofy to being really excited to run.  I just hope that I can carry this feeling through the rest of the spring!

Workout goals:
Smart return to running - I know that 3 weeks isn't a really long time off, but I want to make sure I don't jump back into running too quickly.  It's also been much longer than 3 weeks since I last went to a track or tempo workout.  So my plan is to do two weeks of easy running and then in the third week I'll add a tempo workout.  I don't know exactly when I'll start up interval workouts too, I'll let someone else make that decision.

Races: None - My legs need some time to build back up before I race again.

Non-workout goal: Continue the apartment cleanup - I've gotten a good start, but there is a ways to go.
Posted by Allison at 7:11 AM 10 comments: