I was excited to head up to Philly to race, but it was the most relaxed I'd been about a race in a very long time. In some ways it snuck up on me and I found myself juggling my schedule around at the beginning of the week to get in what I felt like was "enough" miles for marathon training, but to also give myself a little bit of break in the second half of the week. I chatted with my teammates Crystal and Julie on Tuesday at the track and confirmed that they had similar goals in mind. We decided to start off together and hopefully end the day together with three new PRs. I haven't run many races with other people, but have really seen how it has benefited me in workouts and long runs. I was excited to have a pack to work with during this race.

I carpooled up to Philly with some teammates on Saturday. We had reserved a block of hotel rooms, so after checking in and meeting up with everyone else we headed out to lunch. Then it was over to the expo to pick up numbers, shirts and free samples before heading back to the hotel to rest for a bit. Then there was a big CAR team dinner (we filled the entire 50 seat restaurant), before an early bedtime. It was a really fun day and reminded me how lucky I am to have found this team and met so many great people.

With the 8:00 race start and a hotel that was only a mile away, we didn't even have to get up all that early.  A group of us met in the lobby at 7:00 for the jog over to the start. I had brought a throwaway shirt in anticipation of temperatures in the high 50s, but realized it was unnecessary as soon as I stepped outside. I think it was slightly warmer than predicted and also seemed a bit humid. Still a great running day for mid-September, but I wouldn't have complained if it was cooler. 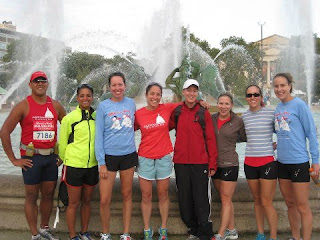 We got to the start area with what seemed like plenty of time to hit the porta potties and hang out in the corrals, but after 25+ minutes in line, I decided I didn't have to go enough to risk missing the start. The corral was jammed by the time we got there but Crystal, Julie and I managed to squeeze our way in at the back before the race started.

I knew that I wanted to keep it nice and easy on the loop through downtown that made up the first 4.5 miles. I had been warned that there were a lot of turns, so it seemed like a good opportunity to practice restraint and just settle in. There would be plenty of time to push the pace later on. I was feeling strong as we came back past the start area and saw several different teammates in the crowd. Miles 1-5: 8:23, 8:11, 8:04, 8:07, 8:13 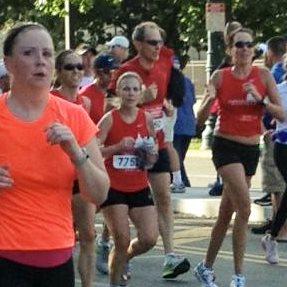 Once we got past the crowds around the art museum and headed out onto Kelly Drive, it was time to start picking it up. I remembered how this had been one of my favorite stretches of the marathon last November. I had made it halfway right on pace and was cruising along. I hoped to recreate that feeling, but it wasn't quite there. 8:00 pace felt a lot harder than I thought it should and I had some random aches and pains that would pop up and nag me for a mile or two. I tried to stay relaxed and remind myself that I didn't need to push the pace just yet. It was somewhere in this stretch that Julie and I got separated from Crystal. Miles 6-8: 7:55, 8:07, 8:00

As we approached the bridge that marked the turnaround point, my stomach started to feel kind of sloshy. I opted to skip the 8.5 mile water stop and hoped that it would be enough to get things settled down and absorbed. In my head, the bridge had been the point where I would drop the pace to sub-8:00 and really hammer it for the last four miles back to the art museum and the finish line. Unfortunately, I was finding it hard just to keep going at my current pace. A significant portion of my brain was telling me that it really would be fine to back off the pace a bit, that I wouldn't regret it later. Fortunately, the competitor in me would not let that happen. It also really helped to be running with Julie at this point. I just kept telling myself to stay with her and focusing on that, instead of on pace or my legs, really got me through a rough patch. A double caffeine Clif Shot just before mile 10, also helped when it finally kicked in somewhere around mile 11. At this point I was doing whatever it took to stay motivated, reminding myself that it was less than a tempo at the track left, counting down the remaining minutes, etc. Miles 9-12: 8:05, 8:03, 8:01, 8:04

As, I passed the mile 12 sign, I knew it was time to go for it, regardless of how little I thought I had left. I tried to pick up my turn over rate and focused on passing people ahead of me. At some point I got slightly ahead of Julie and hoped that she was right behind me. I really didn't think I could go any faster, but when I heard George yelling at me right at the 13 mile mark I somehow found another gear. More teammates were cheering on the sidelines in the last .1 and that really helped me kick it in to the finish. Mile 13, .1: 7:50, 47.6 (7:01 pace) 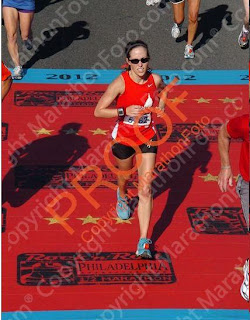 During the race I had my Garmin displaying current mile pace and time only, so I wasn't really sure what my final time would be. My pre-race pacing strategy had assumed several more sub-8:00 miles in the final stretch to get to 1:45:00, so I figured I probably hadn't made it. Needless to say, I was thrilled to switch the display on my watch and see a 1:45:xx!

I'm obviously extremely happy to achieve my goal and I think the fact that it was more of a struggle than I expected is a not a negative. I had hoped that I would feel a lot more comfortable running at 8:00 pace than I did. But I actually take that as a good sign for the state of my running. I didn't do a full taper for this race, nor has it been my main focus. It's a huge positive step on the way to the main race of the fall, Richmond. And I know that on a day when everything comes together, I will go a lot faster.

All in all it was a fun weekend and I hope to do it again next year. 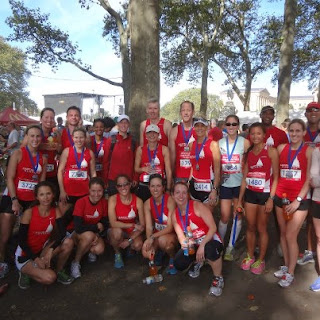 Fantastic job! The pacing looks really impressive. Especially 9-12, and then 13.

You should be really proud of this one.

You were so consistent! Nice race and PR :)

Remember when we were going to run together to break 2 hours? You've come SO FAR in the past year. Congratulations!

You are awesome! Your hard work is paying off big time. Keep it up, girl!

Congrats on the shiny new PR! You looked great out there!

Congrats on a race well-run! That definitely reflects well on where you're at in your training.

I love this report and hate that I couldn't witness it in person!!! Congratulations on your great race, I'm glad the competitor in you won out and you have a smoking new PR!!!

Speedy!! I wish I had just a half marathon to run this training cycle, but the one I'm doing on the 6th is part of a 20 miler. Bummer.