Last year I raced an 8k two weeks before the Philadelphia Marathon and I thought it worked out very well. So I had it in my head that I would probably do a race last weekend from the beginning of the training cycle. Saturday happened to be my brother's wedding day, so it was also appealing to only have to fit in a 5k in the morning, rather than 14-15 miles. I found a two different options and as wedding weekend plans came together and I knew I'd be heading up to the Frederick MD area on Friday afternoon, I signed up for the There's No Place Like Home 5k in downtown Frederick.

This was the third annual race, so I checked out the results from 2010 and 2011 and knew that it was a relatively small race and I would most likely have a shot at being one of the top women, assuming the race wasn't crashed by a high school cross country team. The race wasn't chip timed, so I started right on the line. 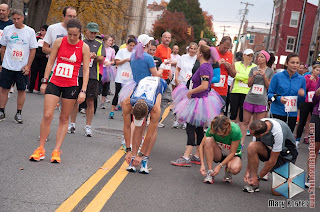 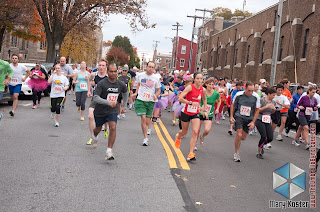 When the race started a handful of guys took off ahead of me, as well as one woman (in green to the right of me in both pictures). I debated trying to match her early pace, but I could tell it would require picking up the pace more than I was ready to do at the beginning of the race. I hoped that I could keep her lead to a reasonable distance and reel her in later on.

When I warmed up I previewed miles 1 and 3 of the course, so I knew that the first mile was flat or downhill and so I tried not to worry about being too fast at the beginning. Within about a half mile I passed one or two guys who had clearly gotten sucked into starting out too fast. I could see the first place woman about a 100 meters ahead of me, but I wasn't making any progress. I left my watch on auto lap because I wasn't sure how well a small race would be marked and my Garmin actually beeped after I had passed the mile 1 sign. 6:52

The second mile was a loop that I'd cut out of my warm up and involved some rolling hills through a pleasant neighborhood. Definitely a lot more up than mile one and lots of speed bumps, which occasionally made for some awkward stepping. I could still see the first woman, but she was getting slightly farther ahead. The road was pretty windy and after I few minutes I realized I shouldn't be following the road as much as I was and should be at least trying to run the tangents. I avoided looking at my Garmin as much as possible and focused more on running at a hard effort. This time my Garmin beeped well ahead of the mile 2 sign. 7:07

By this point I was pretty sure that my goal of reeling in the first woman in the third mile was probably not happening. She was gaining ground on me and not showing any signs of faltering. So I just tried to pick up my pace and get back to sub 7:00. I knew that there was a longer hill in the middle of the mile, so I had it in my head that once I crested that I would really go for it. I'm not sure how successful I was, but I tried! I never saw a mile 3 marker, but once I heard that Garmin beep I tried to pick up my turnover even more. 6:58 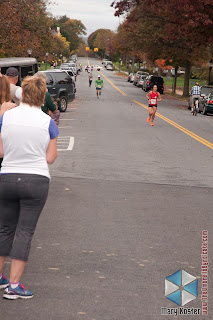 I could see the clock for the last long straight away and watched the seconds in 21 minutes ticking away. I was trying my hardest and thought I might make it, but I saw 22 right before I crossed the line. 1:08 (.17 - 6:51 pace) 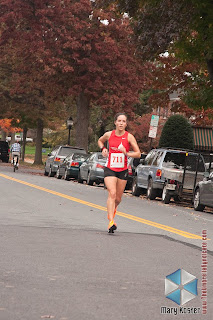 When I finished the race I felt like it had been relatively hilly. Not steep hills, but lots of rollers. I will note that when chatting with the winner afterwards, I kept my mouth shut when she mentioned how hilly it is running in Frederick and that it was nice to run on such a flat course. Garmin data backs her up and shows I totally distorted reality. Total elevation gain was 33 feet.

I talked with the winner and her friend for a while after the race and they tried to convince me to run another 5k that was being held a few blocks over at 2pm. When I mentioned the wedding at 3:00, they told me the faster I ran, the sooner I could get there! While this was tempting, I didn't see my brother or new sister-in-law being too thrilled with that idea. Perhaps if I had raced in my bridesmaid dress... 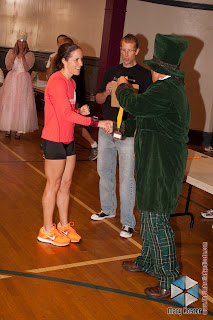 The other highlight of this race was breaking out my new neon orange Nikes. They just look speedy and I have never gotten so many compliments on a pair of running shoes. Big round of applause for Nike for making the Pegasus in so many fun colors. I wish other shoe companies would follow their lead.
Posted by Allison at 6:39 AM

That must have felt amazing! Congrats to you!

So proud and happy for you! Great job!

Such an exciting day!! Congratulations on your new PR, love the shoes!!

Can't wait to see you in Richmond! :)