Last weekend I continued my 5k adventures with the Bright Beginnings 5k. I signed up for this race a while ago, shortly before my coach decided that it should be a team race. At first I joked that I was annoyed that the "small" race I had found was going to be filled with all of my speedy teammates (who would take all the age group awards), but really I was excited to have the chance to race with everyone.

With all the short races on my schedule this spring, I'd been debating buying a pair of racing flats. When I came across a great deal on the Nike LunaRacer+ (because of the release of the LunaRacer+3), I decided to give them a try. They arrived just in time for me to test them at a track workout before wearing them for this race. 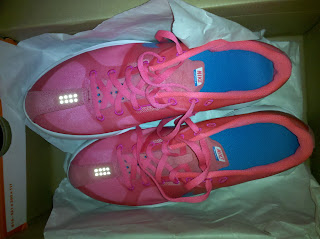 It was pretty cold on Saturday morning, but I'd rather that than unseasonably warm. In the first half of the warm-up someone in my group commented that it seemed to be less windy than normal. On the way back to the start area we realized that wasn't true, the wind had just been at our back. This meant that we'd have a tailwind in the first half of the course and a headwind on the way back. Not ideal, but not much anyone could do about it.

I decided before the race that I would follow the same strategy that I had used at the Have a Heart for Hoffman Boston 5k the week before. Run hard and don't look at my watch. Also, if possible, avoid falling down!

The race start was delayed for a few chilly minutes as people finished picking up packets, but soon we were off. I took off and tried to run at an effort level that seemed hard, but not all out. I was with several of my normal training partners for the first half mile or so and then found myself ahead of them. 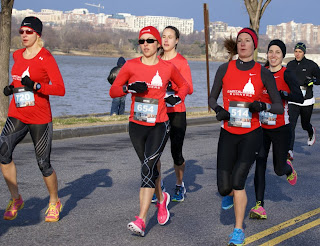 My plan of not knowing my pace was foiled by my coach, who was out at the first mile marker yelling splits. I heard 6:30-something and tried to immediately forget what he said. It was definitely an ambitious pace, but at that point the only option I had was to keep pushing. My Garmin was set on auto-lap, so it has mile 1 at 6:29.

Mile 2 was the best section of the race. I felt strong and was passing people on the way to the turnaround point. I went around the cone without falling down, though I did slow a bit more than I would like. The wind didn't feel too bad when I first headed back and I got a boost from knowing that I was halfway done. 6:39

Mile 3 was more of a struggle. The effort of the first two miles was hitting me and it seemed like the wind picked up (which probably isn't actually true). We had to go back over a small overpass, which really was hardly an incline at all, but it seemed like a giant effort at that point in the race. There was a very long straight away to the finish, which meant that I could see the finish line for a long time. This was both a good and bad thing since for a while it didn't seem to be getting any closer. 6:52 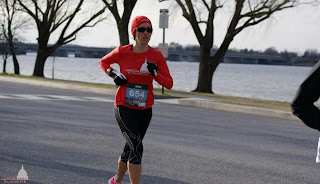 Finally I passed our cheering squad and saw the mile 3 sign. My coach started yelling the time and I did my best to pick it up for that last stretch. 49 sec. (6:17 pace for .13)

I was definitely doubled over at the finish line, trying to catch my breath. I've yet to push myself to the point of vomiting (which seems like some kind of significant hard effort benchmark), but I was extremely happy with how hard I worked and my big new PR. Sub-21:00 was definitely a goal of mine for the spring, but I wasn't expecting to achieve it just a week after I broke 22:00 for the first time. I have no plans to stop here. There is definitely still room for plenty of improvement.

Thanks Cheryl for the race photos!
Posted by Allison at 6:34 AM

Congrats on the massive PR streak! That's a huge time drop so far this season.

This is awesome! Congrats on both big back-to-back 5k PRS!

love your blog and want to personally invite you to Join the DC Metro Area Running Bloggers.
http://www.meetup.com/DC-Metro-Area-Running-Bloggers/ …

It have always enjoyed reading your articles...very thourough and inciteful. I'm just leaving the comment to appreciate your efforts in disseminating the knowledge. ...will keep following your posts as always.....
buy plot in Bhubaneswar