I think the biggest thing I learned yesterday is that when you take your watch out of the equation, you evaluate a race very differently.  I had a rough time in the last few miles and when I finished I was pretty angry with myself, despite the fact that I ended up with a pretty significant PR.

The first few miles were relatively uneventful.  The course was pretty crowded, so I tried to keep a steady pace and move around people without expending too much energy.  I saw a number of great CAR spectators near the start and then my mother was out on Memorial Bridge and again near mile 4.  I felt good in the early miles, but since I hadn't raced in months, I had no idea how it would go later on. 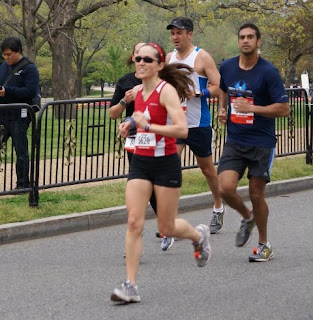 Photo by Cheryl﻿
When I hit mile 5 I was happy to be halfway, but also starting to realize that the second half was going to be pretty painful.  I knew there was water somewhere around mile 6, so when I got past five and a half miles I took my Clif shot (chocolate cherry - double caffeine!).  I felt an immediate boost and was able to drop the pace a bit as I headed out onto Hains Point.  My goal had been to treat those last four miles as a tempo run and incrementally drop the pace/increase my effort each mile.  I felt like I was right on track on the way out to the end (miles 6, 7), cruising along comfortably and passing a number of people without too much difficulty.

Unfortunately, when I reached the end and turned around to head back towards the finish, I could feel my energy start to lag.  This was eerily similar to what has happened in all three of the tempos I have run since returning to the track.  In those workouts, I felt strong for the first mile and a half to two miles and fell apart in the last mile (in two cases I was planning on four miles and stopped at 5k).  The worst part about feeling myself slowing a bit was not actually that I was slowing, but that my mind immediately recalled those workouts and I let it get to my head.  As people I had passed started going past me, the negative talk in my head just got worse. Instead of trying to push past it, I held back, afraid that I would completely fall apart. Unlike with those workouts, there was no option to stop early. I was afraid to force myself to pick it up when I saw the 8 mile marker and instead waited until I had completed mile 9.

Fortunately I was able to rally and get going again in the last mile and tried to pick people off as I ran up the slight hill that was about a quarter mile from the finish.  Despite the fact that I had not looked at my watch the whole time, I had a general idea of how I would finish because I had a hard time ignoring the clocks posted at every mile marker and I had a very rough idea of the time on the clock when I crossed the start line. So I thought I was actually probably going to be pretty close to the PR I ran at Army in the fall, especially if I did a decent job in the last mile.  Yet even though I knew this, I crossed the finish line feeling disappointed and angry.

After walking a bit down the chute, I finally changed the screen on my Garmin to see my time and was surprised to see that I hadn't squeaked under my old PR, but actually been almost 90 seconds faster.  This should have immediately made me feel much better about the race, but oddly, it didn't. I think I was so focused on ignoring my pace that I could only tie my evaluation of the race to my feelings about how it felt to run. I just didn't feel like I had run a smart race and that bothered me.

For the sake of comparison, here are my splits from the Army 10 miler (my old PR) vs. yesterday's race: 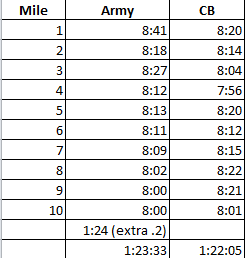 When I ran Army I had my Garmin set on autolap, which is why I ended up with 1:24 of extra time. I hit lap myself for Cherry Blossom, so even though my Garmin distance was a bit long (10.12 miles), the splits are accurate for each mile. If I redistribute the extra time from Army over 10 miles (to make the math easier I just did 8 seconds per mile), the comparison is a bit more relevant. 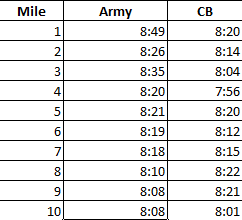 Looking at this adjusted split comparison is what finally kicked me out of my funk and made me feel a whole lot better about this race.  Yes, I didn't do a great job of picking up the pace over the course of the run (I did a better job in October), but my splits for eight of ten miles were faster yesterday.  And I was relatively consistent overall, the range isn't that large.

It feels good to know that even on what I considered to be not enough training this spring, I am still ahead of where I was last fall.  I was worried that the time off after Goofy and subsequent piriformis issues had set me back pretty far.  Fortunately that does not appear to be the case. I said in my goals post that I wanted this race to be an assessment of where I am right now and I think it ended up being a good evaluation of my current fitness level. I'm looking forward to really focusing and working hard in April and then, hopefully, racing a strong half in May.
Posted by Allison at 6:22 AM

Woo hoo Allison! Congrats on the shiny new PR! Regardless of how you got it.

The local 10-milers are SO crowded, it's a wonder we can hit anything under 10mm. Great job on a solid race!

There is a lot of math in this post. As well as obsessive race analysis. I approve.

I don't think you need to feel the way you "should" feel after a race. Just because you had a PR doesn't mean that you met your goals or expectations, so it's OK to be disappointed.

Good job on your PR and I agree with Victoria. There has been many times that when I cross the finish line even though I PRed I still feel disappointed.

Nice run, Allison. You did a great job for just really getting back into it. But, I understand how you feel and wanting to feel better about executing the race! We will get there!

Congrats on your PR!! You looked great when we saw you!

I know what you mean on the "how you feel" affecting you more than the actual results. looking at the results, it seemed only mile 8 you had to dig deep and the rest of the time you ran amazing!!

Your pacing was very consistent! It's supposed to hurt at the end of a 10-miler, so it sounds like you raced it just about perfectly. Based on this, do you think you will look at your watch more in races, or continue to not look at it?

It was great to run into you on the Metro back! What a coincidence we were at the same spot at the same time!

Congrats! What this really says is that you have an even bigger PR in you. So, it wasn't this weekend. That's ok. Building back up takes time and you have the whole rest of the season to keep getting there. Now sign up for that 1/2 already!

Hey PR is PR! Congrats! You rocked it!

Congrats on your PR! I've never run a race completely without a watch before--not sure I'd be able to do it--but it seems to have produced results for you. You should should feel very proud of yourself for having achieved a big PR after time off due to injury.

Congrats on a new PR!

So, there's room for improvement, and potential for even faster races. That's a good thing, right?

I think it takes a lot of work to learn EXACTLY what the right effort level is -- I'm still learning. But you'll get there.

Great job! Congrats on the PR!

Congrats on the PR!

wait a second. your butt was broken until yesterday, right? and you've only been to tempo maybe twice, right? I think this is going to be a great season for you. CONGRATS.

Great job on the race! Its nice to see improvement from fall for sure! Your consistent pacing is a great sign of your fitness! Especially since you didn't look at your watch. Running by feel is so tough but I think it actually helps to even out the effort so you don't go out too fast or too slow, just go by your breathing and how you are feeling.

Sometimes you have to flout conventional wisdom and go out "too fast" to get that PR. And it never seems to feel good or smart going out hard at the start.

Congrats on the new PR!