A few months ago I got the crazy idea that I should sign up to swim the mile in a swim meet to practice racing before the half ironman relay in May. I was doing occasional time trials at the distance, but I was curious to see what I could do in an actual race. I managed to convince Katie to join me and, after spending far too much time debating over how to seed myself, I was committed to my first swim meet since I was on a local Masters team in 2005.

As a side note, in all of my years of competitive swimming, I never once swam the 1650 in a meet. I was a breaststroker and sprint freestyler and anything over 200 was WAY too long for me.  Of course, back then I also thought three miles was a long way to run.  How times have changed. 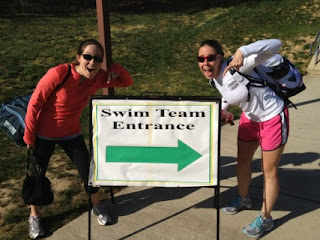 That's right, we're here for a swim meet!
The meet was held at the George Mason University Aquatic Center and the distance events are relegated to Friday evening so that swimmers doing all of the other "normal" events aren't forced to sit through them.  We arrived with plenty of time to check-in and warm up before the first heats kicked off at 6:00. Fortunately, I also was able to practice starting off the blocks a few times, something I hadn't done in years.  After going way too deep the first two times, I got it sorted out and was ready to go. 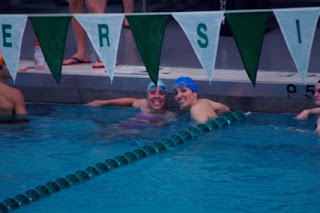 The heats are run fastest to slowest with men and women together, regardless of age. I was in the third heat of the mile so we had about 45 minutes to kill once the meet started.﻿
﻿ 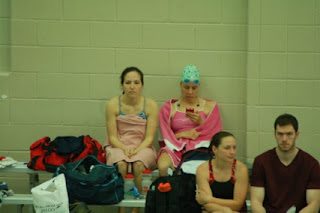 Clearly we were thrilled to be there
Once the heat before mine started I made one last trip to the bathroom and then took a double caffeine Clif Shot.  I've never tried anything like that before a swimming race, but I figured that it works so well during runs that I might as well give it a shot.  I waited until the last possible minute to put on my super tight goggles (don't want them falling off during the dive, but also don't want a headache!) and cap and then it was time to go. 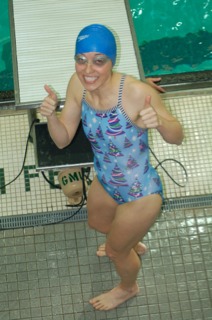 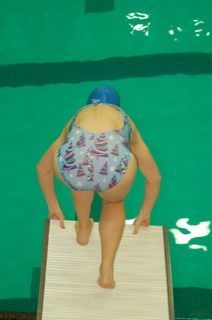 My only fear was that my goggles would fill with water as the result of my start so when I hit the water and they were fine, I relaxed.  I felt like a got a good, strong start and Katie would tell me afterwards that she thought I went the farthest of everyone in my heat. I never going to win, so it's those small victories that are important! Obviously it's hard not to be fired up at the start, but I tried to keep myself under control.  The guy to my outside (with a slower seed time), took off within the first 100 and I knew that I couldn't stay with him.  I was a little nervous that this meant I was way off of my projected pace, but I knew I couldn't spend time worrying about it. The guy to my inside also pulled ahead and though I tried to maintain the gap, he kept pulling ahead. 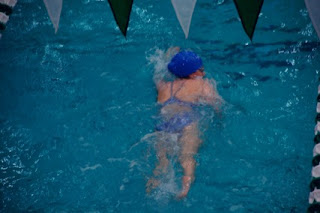 I felt strong for the first 500, but then I got tired. The second 500 was by far the hardest part of the race for me.  I only about a third done and my arms were burning. The two guys I could see were pretty far ahead and I had no real sense how the other five people were doing. For all I knew, I was dead last. And I really didn't want to be stuck swimming a 50 (or more) at the end when everyone else had already finished. There was a lot of yelling going on in my head as I tried to keep swimming at a steady pace and not back off.  Around 900 I started to think that it would have been a lot better idea to sign up for the 1000 instead of the 1650.  I was sure that the drop off in my splits between the first 500 and second 500 was going to be dramatic, but the actual numbers don't back that up.  I was only about a second slower per 50, which I think is relatively normal. 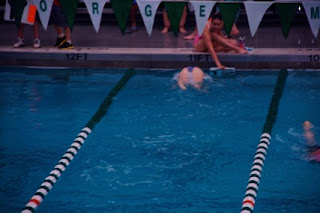 Before the race, I had decided that my strategy should be to stay steady for the first 1000 and then give it whatever I had in the last 650.  During the tough patches during that second 500, I started to doubt this strategy.  Since I was struggling, I thought that there might be no push in that final third of the race. But a funny thing happened right around that 1000 yard mark. I noticed that I had a gained a bit on the guy to my inside (not the guy on the outside, he lapped me several times and ended up winning the heat).  He was still probably at least 10-15 yards ahead, but I decided that I was going to catch him before the race ended or die trying. This re-energized me and I started slowly closing the gap. It happened faster than I expected and I went by him at 1400. I didn't want him to take the pass as a challenge and come back past me so I kept pushing the pace. Then I was just counting down the remaining laps and before I knew it I was in the final 100, and then the final 50 and Katie was putting in the bright orange counter. 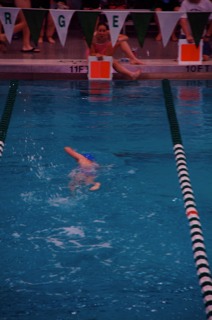 There was not a much better feeling than making that last turn and "sprinting" with all I had left in that last 25.  And then I was done and with a shiny new (automatic) best time of 22:18.05. 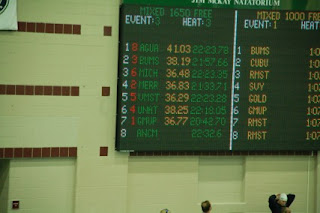 I was in lane 6
Going into the race I decided that I would be happy with anything under 23 minutes, so I was thrilled with this time.  Last weekend I did my last pre-race time trial in 23:20, so this was a good improvement.  It was also a 1:21 pace per hundred, which is what I thought I could hit if I had a good race. It also shows I am right on track to hit my goal time for the 1.2 mile half ironman swim. I'm also happy that my splits were pretty consistent, despite the fact that I felt like I was really struggling from 500-1000. 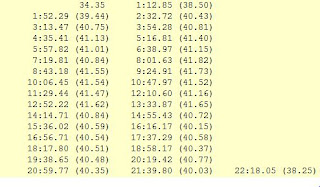 I had about 10 minutes after my race to catch my breath before counting for Katie in her heat of the 1000.  I'll let her share all of the details, but she did an amazing job! 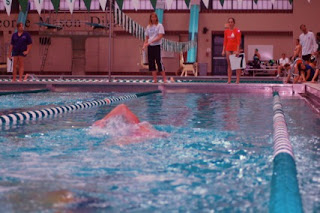 Overall, it was a great experience. It was so fun to be back in the swim meet environment and wished that I had signed up for more events on Saturday and Sunday. It was a good reminder of why I was a swimmer for so many years and I'm already thinking about adding more meets into my schedule.﻿ Also, like any good competitor, I'm already thinking about how I can improve on my time. I know that I can get all of those 50 splits under 40. I'll never be setting any records, but I think that this former sprinter can become a solid distance swimmer.
Special thanks to Thom who was our race photographer!﻿
Posted by Allison at 6:18 AM

December. We will race in December. Challenge on.

Yay! So fun. I'm glad all your swim sessions are paying off!

That's awesome! I'm still building up my distance in swimming. Actually had my first adult swim lesson this weekend, turns out my self-taught stroke wasn't so bad after all. But still not nearly as awesome as racing a mile. Congrats!

it seems like you had a really great time and I think thats a great swim time!

Pretty cool about how swim race reports can be almost as interesting as running race reports ("almost" because no mention of hills, heat, etc. Just you and the pool :))

Congrats!! I'm sad I missed out on the fun, but now Kinetic can be the head-to-head swim off of the century that we've all been waiting for. RAWR

Congrats! I love all of the pictures, especially the one where you're waiting. Someday I'll figure out swimming. Maybe.

That is really fast! And it sounds like such a fun experience. Love the photos!

I love that on Katie's blog y'all are mugging for the camera while waiting and you selected a photo where y'all look utterly disinterested. But how cute are YOU in your Christ,as suit? Congratulations on a great race!! Looks like y'all had fun while kicking butt!

You and Katie both killed it! Good job, and I luuurve your suit. :-)

Sounds like such fun! I know nothing about swim times but that seems like a well-paced, smart race.

Loved this: "There was not a much better feeling than making that last turn and "sprinting" with all I had left"

I had SO MUCH fun with you! thanks for talking me through this!