Two weeks ago I participated in my first ever triathlon relay, the Kinetic Half. If it wasn't totally obvious after I talked about it here and here and here, this was my A+++ race of the year. In addition to a "friendly" team competition with two other CAR & friends teams, there was a swim showdown with a certain Ironman in training. The fear of this intense competition motivated me to get back into the pool in January and to actually swim at least two times a week every week until the race. I took advantage of another future Ironman's excellent coach designed workouts by crashing a bunch of her swims, swam my first ever mile race, and managed to conveniently be at the pool a lot of the same mornings as my competition for pre-race reconnaissance. After four months of dedicated training, I was ready to race! 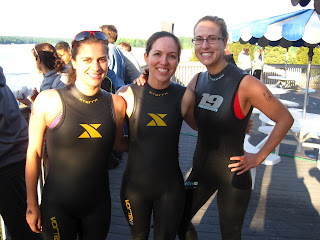 Sure, we look friendly here, but this was a cutthroat competition﻿

Relays were in the last swim wave, so Beth, Jessica and I had plenty of time to get into our wetsuits and make our way down to the start. The course was a triangle so I decided to mentally break the race into three legs. Strong start, hold steady as we went across the far side and then go as hard as possible after I made the second turn and headed back towards the finish. We lined up right at the front and when our wave started I tried to dive right in a get myself clear of the masses. I could see Beth just ahead of me for about half of the first "side" but once we started to run into the waves ahead of us I lost her in the crowds. Once I caught up to those first swimmers, I never had a really clear path for the rest of the race. Being a relatively inexperienced open water swimmer, I still don't know exactly how often to sight or swim straight without a black line to follow, but I tried to settle into a decent rhythm. I'm guessing that I was probably looking up too often and would have been better off swimming for longer stretches with my head down. However, in addition to looking for buoys, lifting my head up helped me see the swimmers ahead of me. I definitely did a fair amount of weaving during the race, some that was helpful, some that probably just tacked on extra distance I didn't need. 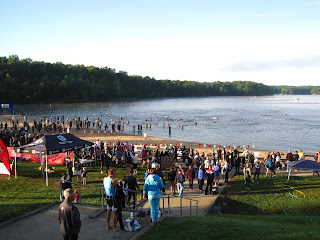 By the time I made it to the second side, I felt like I had settled into a good hard effort and was happy with my pace. I was a bit frustrated by all of the traffic, but I was doing my best to kept pushing.  I was about halfway across the second side when all of a sudden I got a massive cramp in my left calf. I've gotten calf cramps in the pool before (though not during this training cycle) and I've always felt some sort of twinge ahead of time (normally when pushing off the wall) to warn me that it was coming. This one came out of nowhere. Immediately my brain went into overdrive. Given that there was no side of the pool where I could stop and stretch it on (my normal remedy), I wasn't sure how I was going to get rid of it. For less than a second I thought about stopping to do some type of awkward stretch while treading water, but immediately ruled that out because this was a RACE. Not only was it my race, I had teammates depending on me. So I settled for flattening my foot, lifting my toes towards my ankle and attempting to stretch it out that way while still moving. I more or less stopped kicking with my left leg and relied on my arms and a weak right leg kick.

The cramp had pretty much gone away by the time I made the second turn and headed back to shore on the final leg, though I was somewhat nervous that if I started kicking too hard it would come back. To be honest, my main worry at this point was that I would try to stand up and exit the lake and fall back down because my leg cramped up again. But I did try to increase my kick somewhat and pick up my overall pace. This leg was challenging because we were heading into the sun and even with my mirrored goggles I couldn't see much.  I swung far too wide going around the turn buoy and realized about a third of the way through the leg that the marker buoys were way off to my right. So I tried to work my way back onto the line while still heading forward. Finally my hands hit the bottom and I was up and running (no cramps!). 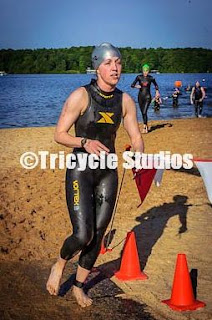 I heard them mention Jessica's name and team on the loudspeaker as I was running up the hill towards the transition area and knew she, at least, had finished ahead of me (turns out it was Jon leaving transition on his bike).  When I got to our rack and handed off my chip to Lauren, I found both Jessica and Beth waiting. 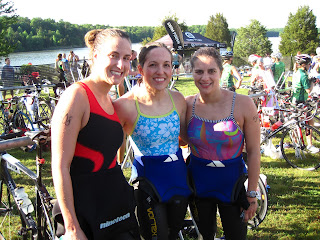 I ended up finishing in 31:23, a little over a minute behind Jessica and about 50 seconds behind Beth. I had been hoping I could break 30, and I am still quite confident I could do that for the distance in a pool, but I had forgotten about all of the additional complications of open water swimming. The calf cramp didn't help either, but I doubt it slowed me down all that much. Maybe 10-15 seconds, if even that? (As for the cause of the cramp, I'm blaming the wetsuit. It was the only thing that was different about the day. I think the compression, plus the fact that it ended mid calf, leaving half my calf compressed and the other not, must be the cause. To support this, my calf cramped again when I was pointing my toes to pull of the wetsuit and it got stuck around my calf.).

The time works out to about 1:29/100 yards. In contrast, at the Culpeper sprint tri last summer, I averaged about 1:43/100 yds over a significantly shorter distance. I wasn't wearing a wetsuit then, but this is certainly an improvement! With a few more open water races lined up for this summer, I hope to get that average even lower.

After getting changed, I spent the rest of the morning cheering for my team, the other CAR teams, and my brother who was competing in his very first 70.3! I felt like a bit of a slacker given that Lauren was on her bike for 56 miles and Steph had to run a half marathon in the heat. Not to mention all those athletes who did it all! Our team ended up finishing in 5:40:18, 16th out of 37 teams. Given that there was only one relay category and some of those teams could have been all men or co-ed, I think we had a very strong showing.
Posted by Allison at 6:18 AM

It truly was the RACE OF THE YEAR!!! I look forward to going head-to-head with you again soon :)

I got so lost out there on the swim course.

You get a rematch this weekend. You can take her!

You all just killed it. And it sounds like such a fun day! Congrats on your swim-- and you rock that wetsuit! :-)

holy balls youre fast. maybe i should get back into the water soon, yea?

my god you are speedy! looks like a fun race. open h20 is definitely different from the pool, but you still did fantastic!

I thought all your swim times were awesome! congratulations on a great race, I wish I could have been there to cheer (or participate!)

coming out of the water, you look hilarious. and your swim times rocks (says the slow girl)