The first half of 2013 is going to be all about working on speed, so it seemed appropriate to start the year with a 5k. I was interested to see what kind of turnover was left in my legs after marathon training. I knew that the last few lazy weeks hadn't really affected my fitness, but I had pretty low expectations for my speed. I was hoping to be within 45-60 seconds of my PR, which would have put me in the high 22/low 23 range. Since this was going to serve as a baseline race, I may have even joked beforehand that a poor showing would make improvement over the next few months just that much easier.

Given the relatively small size of the race, my teammate and I lined up close to the front to avoid getting caught in a bottleneck when we hit the W&OD trail. My strategy was pretty simple. Run hard from the beginning and don't hold back at all. I plan to race a lot this spring and I hope to blow up as much as possible. I need to figure out how to keep pushing when that happens and run in that uncomfortable zone without backing down. So I took off at the start and tried to settle in as much as is possible in a 5k. 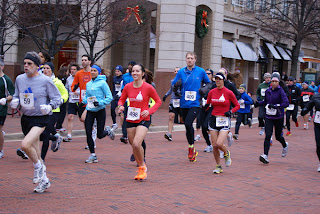 I had my Garmin set to show current mile pace and distance, but tried not to focus on it too much. My goal of all these short races is to race and not worry about holding back. And if I need to a watch to tell me I should be picking up the pace later on, well, I'm not doing something right. 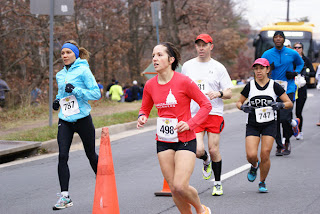 I had to do a bit of weaving in the early sections on the trail, but it wasn't nearly as bad as I had feared it might be. I was feeling surprisingly good for not having done any speed work in at least a month and felt like I was cruising all the way out to the turnaround. Of course, just a minute or two after thinking "this feels really good," it started to feel a lot harder.

I knew I was slowing during mile 2, but it was never that "about to die" feeling. Hard to explain, but more like my turn over rate just gradually slowed because my legs weren't used to sustaining that kind of effort.

Mile 3 contained most of the uphill sections of the course as we came back up to the town center from the trail and did another loop around and up before a slight downhill to the finish. I continued to slow and was, unfortunately, passed by a number of people in this stretch. I tried to rally by attempting to catch back up to one guy in particular, but it didn't happen. I think I probably had it in me to make the final push a bit sooner, but I wasn't familiar with the course layout to know how much was left (and I never trust Garmin in these situations).

I did know enough to recognize when we were making the final turn onto the straightaway for the last .1 and was able to sprint in to the finish. 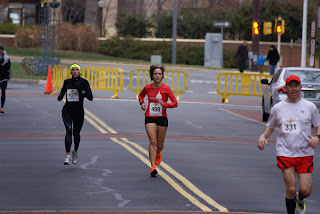 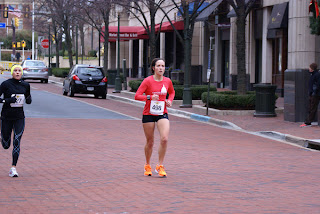 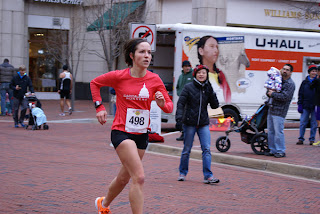 When I was finally close enough to see the clock, I was shocked to see that it still said 21. I had no idea that I was even close to a PR, and assumed that I wasn't given the progression of my splits. I was pretty sure that I hadn't snuck in under 22:00, but it was going to be very close to my PR. (22:02). Turns out it was about as close as you can possibly be.

This is probably the happiest I have felt after a non-PR race in a really long time. Perhaps it was because I entered with low expectations, but I was thrilled with this performance. While in most circumstances I would find those splits discouraging, I actually am extremely encouraged by them here. I know I faded because I'm not used to running fast (and am coming off a bit of break), not because I had bad race execution or fell apart mentally. I feel confident that with more speed work and consistent training under my belt, I can take it out like that and maintain that pace. I couldn't have asked for a better kickoff to my "spring of speed." Now it's time to get to work.

Thanks Dash for all of the photos!
Posted by Allison at 6:17 AM

Congrats on finishing 2nd in your age group, and being so close to a PR. I bet many speedy 5ks are in store this spring. Yay PAIN!

Hooray for a near PR! I'm excited to see your times drop again this year!

Hoorah! What a great race!

I think you should be thrilled with that race :) And you got some great pictures to boot!

I approve of this (except the 'as much as possible'). I've done that every once in a while (most notably in a mile race this past summer) just to see where my limits were. It's a useful exercise, and can be a confidence booster.

Great photos of what sounds like an incredible race! I often find that those unexpected victories are the sweetest ones, because they show that our expectations and judgements are NOT necessary parts of solid performances. Congrats on a race well-run!

You are awesome! Great race!