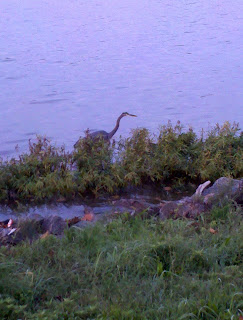 Random bird at Hains Point
Tuesday October 25
Run 8.87 mi
5x1200
This was another good workout at the track.  I had a pack to run with for the first four repeats and then did the last one by myself.  I had been relying on the others for pacing so I wasn't sure how the last one would go, but it ended up being the fastest of the five (despite the fact that I went way too fast the first 400).
Wednesday October 26
Run 7.3 mi
An extended run commute to pick up a few extra miles (with super dark photos. Sorry, it was early). 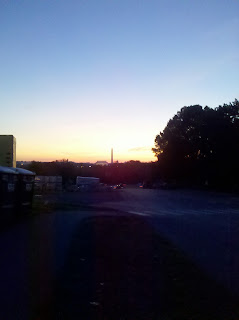 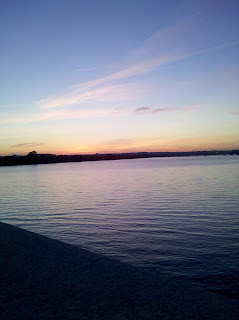 Friday October 28
Run 7.19 mi w/4 mi tempo
This was the first really cold morning we have had, so I finally broke out the capris and never managed to shed my long sleeve shirt.  But I love cold weather running so I had no complaints.  There was a smaller crowd at the workout due to MCM and other weekend races so I didn't have a nice pack to run with like the week before. I ended up running by myself for the majority of the tempo, but stayed steady and finished a second or two faster than the week before.  I'll was very happy with this since I had to do a lot more mental work this week and my legs had a lot more miles on them!
Saturday October 29
Run 21.0 mi
This was one of the most miserable runs I have ever had. Certainly probably the worst when it comes to weather related misery.  It was cold and raining the whole time. Because I was signed up to volunteer at MCM on Sunday, I didn't really have to option to push back the run.  Fortunately, Thom somehow still agreed to run with me.  We were both very unhappy the whole time, but I know I couldn't have finished it without him!  As soon as we finished I immediately changed out of all of my wet clothes in the car and was still freezing. When I started driving to brunch (where pumpkin pancakes and fun blogger/twitter friends were waiting!), I started shaking/shivering violently even though I had the heat on as high as it would go.  It took sitting inside for a while and several cups of coffee before I finally felt warm.  I don't know what Mother Nature will throw at me on November 20, but after this run I can say that I am prepared to run in any weather!

Sunday October 30
MCM volunteering & spectating + 60 min pool run
Fortunately the MCM runners had a great, though cold, day and didn't have to deal with Saturday's weather.  I started out handing out water at Key Bridge with some teammates and then spent several hours cheering near the finish line on 110.  It was a lot of fun, though my legs were pretty tired after standing for that long.  Later in the afternoon I did an easy 60 min pool run to loosen up my legs.

Week 13 - 51.61 mi
My very first 50 mile week!  I was very happy to finally reach this milestone in my last big week of training.  I had a very good week and am really looking forward to tapering (while not going too crazy) and racing in Philly!  My legs are definitely feeling the miles and all the standing from yesterday.  So I'm kicking off the first week of taper in the best way possible, with an extra rest day!
Posted by Allison at 6:37 AM

Post-workout chills are awful. I get them in a terrible, terrible way - as in, wearing 3 sweatshirts in the summer. Sorry you had to deal with that...

Wow- fantastic week! Doing a long run in really cold temperatures is hard to recover from with the chills. For me, I have to take a bath and have a hot beverage and it still takes awhile to fully thaw!!! You are going to kill Philadelphia!

awesome week! i still can't believe you guys did 21 in that mess. you're a rockstar.

You are such bad ass for running on sat!!! I was a wimp and stayed inside :(

Such a great week! I think that pool run was the best thing we could have done yesterday. Well, maybe staying on the couch would have been better. It's debatable.

wow, killer week! i'm so impressed with how strong your training has been. i've had a few runs like your 21 miler, where you just seem to be chilled to the bone and can't warm up. hopefully you have better weather on race day. can't wait to see what happens in philly!

It was awesome meeting you and I'm still so proud of you and Thom for being such bad asses on Saturday's run. Saturday night was a trip... I heard your ladies night got a little crazy LOL! :)

Look at you go! You hit 50 miles, I hit 40! YAY! What a great week last week was!! Hopefully there are many more awesome weeks ahead!

I can't believe you ran in that weather. You're officially badass.

Amazing! and way to gut it out in that horrible horrible weather.

I am totally in awe of you and @poetguru. Nice meeting you at brunch. And the bird is a Great Blue Heron. :)