2011 was the best year so far of my relatively short running career and I am hoping that 2012 will be even better.  While I hope set plenty of new PRs, I don't want to make specific times my main goal. Instead I am choosing to focus on the process and setting goals that will ultimately help me become a better, stronger runner (and athlete).  I know that if I work on achieving these goals, faster times will come along with them.  That being said, these are my main goals for 2012.

Run more
In addition to being something that my coach advocates, I can see the difference that running more miles has made for me in my own somewhat limited running history.  I started tracking miles in 2009, the year I trained for my first marathon (Marines Corps) and the year I started to think of myself as a runner.  In 2009 I ran 595 miles, in 2010 1101 miles and in 2011 1284 miles. 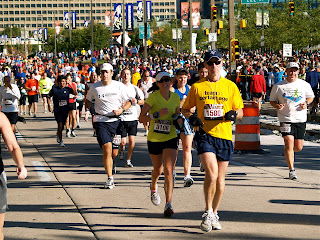 2010 Baltimore marathon
All of my current PRs are from 2011.  While joining a team and starting regular speedwork certainly had a lot to do with my fall PRs (8k, 10 mile, marathon), I know that all of the running I did in 2010 is the biggest factor in the PRs I set last spring (5k, 10k, 10 mile (since broken), half marathon).  And I don't think I would have seen as many benefits from speedwork without a solid base.  I got to 50 miles in a week for the first time ever and I want to make sure I hit that weekly total more often the next time I am training for a marathon.

So one of my biggest plans for 2012 is to run more.  The goal? 1400 miles. While I am putting a specific number out there, getting to 1400 isn't what really matters to me.  I'm not going to push to hit a certain number of miles each month or fight through injuries to make sure I hit that number.  I'm just going to focus on the process of building and maintaining a strong base and taking a break (or running in the pool) when my legs and body need it.

Pick up the pace on long runs 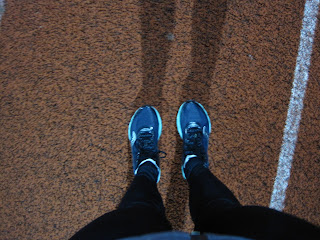 I introduced speedwork to my training for the first time in 2011.  It started with solo visits to the track during training for the National Half and really picked up when I started running with CAR in the fall. I know that this made a huge difference for me and fully intend to keep it up in 2012.  However, one area where I'd like to focus on working harder is during my long runs. I know that in order to improve my marathon time, I'm going to need to practice running at a faster pace.  I know that there is a danger in running long runs too fast, so obviously I need to find the right balance.  So I'll focus on continuing to start slow and finish fast, while working to bring my average pace for the run down.

I know one of the big reasons that I was able to PR by 39 minutes in Philadelphia was that I ran my long runs over 90 seconds faster per mile. I believe that if I work over the course of this year to drop my long run pace by 20-30 seconds, I will see a corresponding drop in my marathon race pace. 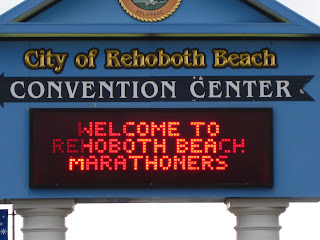 Get back to swimming
As a former swimmer, I have burned out on the pool more times than I can count.  I took a few years off after college, then did Masters for about two years and then stepped away for a few more years.  When I decided to try triathlons last summer, I headed back to the pool again.  While I discovered that I am not cut out to be a cyclist, I really enjoyed getting back in the pool and swimming more than a casual 1000-1500 yards. 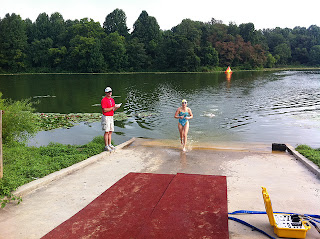 Unfortunately, once marathon training started in the fall I totally abandoned swimming and didn't go to the pool once between Labor Day and mid-December.

So one of my goals for 2012 is to get back in the pool more regularly.  I'm not sure that I want to do any triathlons this summer, but I do want to do a couple of open water swims and I'm already committed to the swim leg of a half ironman relay.  If I want to do well in those events, then I need to be swimming more than once a month.  I'd like to swim at least 50 times this year. Once a week isn't a lot but I think it's a good average for the year since I'm sure I'll swim more during the summer and less next fall when I train for Richmond.  I think having a number will keep me on track, rather than just pledging that I will swim "more."

Core/weight training
I am being somewhat optimistic putting this on here. Core and weight training are things I truly struggle to fit in and I don't hold out high hopes that 2012 will be any better.  But perhaps by being more aware that this is something I need to work on, and actually listing it as a goal, I will make some progress. I know I need to start simply and that less is more when it comes to adding new activities to my regular routine. If you have any tips or routines/programs that have worked for you, please share them. I will need all the help I can get to meet this goal!


So these are the four areas I'll be focusing on in 2012.  I know that January 1 is an arbitrary date, but I like using the start of a new year to evaluate where I am and refocus on where I want to be and what I need to do to get there.  I'm looking forward to putting in a lot of hard work over the next 12 months and continuing to progress as a runner.
Posted by Allison at 6:12 AM

Come workout with our trainer!

In my experience, running more works as long as your body can handle it. See you in the pool :)

Those sound like awesome and very achieveable goals that will only make you stronger! I look forward to running with you in 2012!

If you figure out how to prevent swimming burnout, let me know? I also want to swim about once a week but don't want to hate getting in the water each and every time!

Which half IM relay are you doing?

you can come lift with me if you want.

Wow, you really didn't run that much farther in 2011 vs 2010 and yet you CRUSHED the marathon. hhhhmmmmm, thank you CAR!

Nice post and great goals! 2011 was such a big year for you and I am sure that will continue into the next year. I like your idea of speeding up the long runs, but finding the right balance. Happy New Year!