The plans for this race started over two years ago at the 2009 Marine Corps Marathon.  My friend Katherine came up to run and we decided post-race that our next marathon adventure would be Disney.  Unfortunately some schedule conflicts prevented us from making the trip in 2011, but we signed up for the 2012 race on the first day registration opened in March 2011!

Katherine was planning to run a slightly slower pace than I would if I ran on my own, but I decided I would stick with her and run her pace. This race was never going to be about time and knew it would be a lot more fun if we made all the stops together instead of alone. 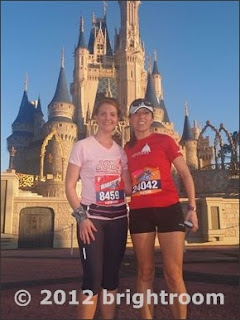 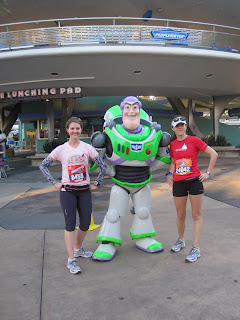 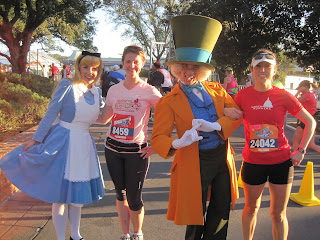 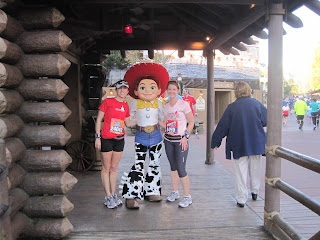 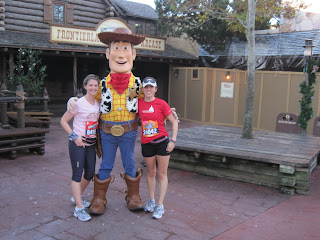 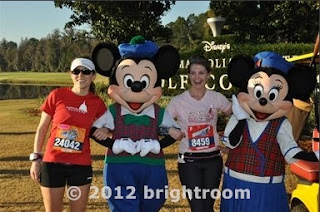 Somewhere in the stretch between the Magic Kingdom and Animal Kingdom they were handing out bananas. Best idea ever. My stomach was so happy. They handed them out again sometime later too, maybe around 18-19.  Disney, I applaud you. Every race should do this. 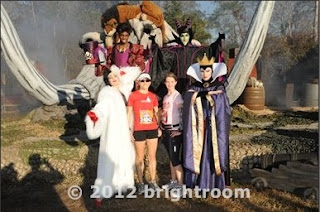 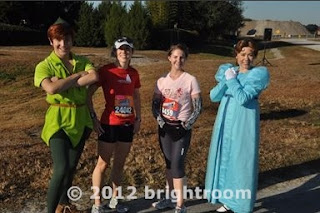 Between miles 16 and 17, the course in Animal Kingdom took us right by the Expedition Everest roller coaster.  We saw two people ahead of us go in and when we saw that there was almost no wait (5 minutes), we headed in as well. Because when else are you going to have the chance to ride a roller coaster in the middle of a marathon? 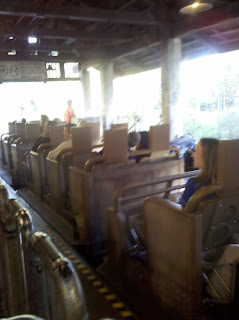 After finishing the ride and tweeting about it (of course!) we were back to running. 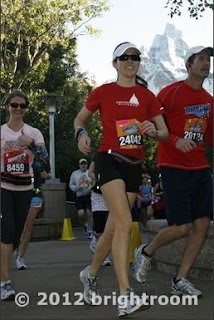 Hey, see that mountain? We just rode that roller coaster!
The stretch of highway between Animal Kingdom and Hollywood Studios was the longest part of the race for me.  There was minimal entertainment and the temperature was starting to rise.  This was where the race started to get a little weird for me.  My legs (particularly my quads) were sore, but because I was running a slower pace than I normally would, the rest of me felt pretty good.  I don't think that my heart rate ever got all that high and felt like I could go faster.  I definitely never entered that pain zone/mental fog that normally shows up in the last few miles of a marathon.  I certainly was looking forward to finishing but I never NEEDED to be done.
Finally we passed mile 21 and made the turn into Hollywood Studios.  They were handing out fruit snacks (and chocolate - which I missed) at the first water stop in the park.  Again, I have to hand it to Disney on the food and water stations.  There were some Clif Shots stations, bananas, oranges, fruit snacks and chocolates.  And it seemed like we were getting water almost every mile.  Very well done and organized. 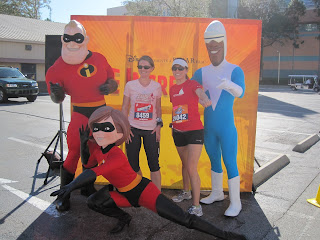 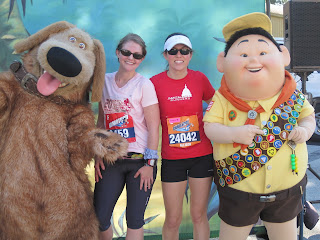 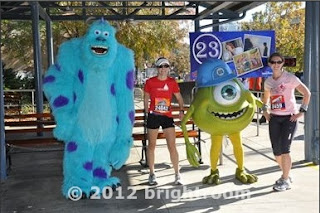 We followed some kind of boardwalk to get from Hollywood Studios to Epcot and then we just had to run "around the world" before finishing. I'm not sure if it hurt or helped that we have spent the previous afternoon at Epcot and I knew exactly how far we had to go. 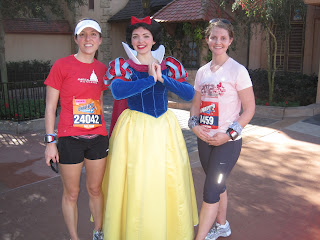 
This was my fifth marathon, but the first time I have actually run the whole race with someone else.  So we had to finish hand in hand!
﻿ 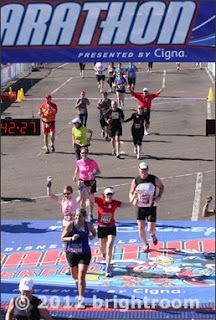 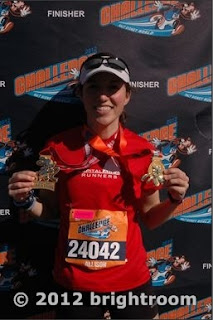 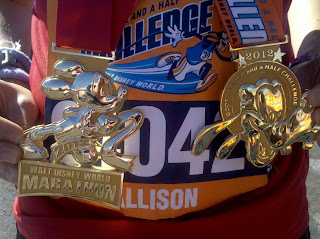 Looks like a blast. The fact that you can ride the rides during it amazes me. I saw this on someone else's blog too but it's the first year I'd heard of it!

congrats! looks like you had a great time. i love all the photos!

love all the pictures! It looks like you guys had such a great time

I think it should be a requirement that people ride rollercoasters and take pictures with characters at this race. Why the hell else would you do it?!?

Congrats again on running a crazy number of miles in a weekend!

I think it would be a waste of money if you didn't soak up every Disney moment running that race! So awesome you got to ride the coaster mid-race!

Was there a time limit to finish the race? Maybe next year go for broke and hit up 2 roller coasters?!?

Every race should have cartoon characters and roller coasters. Otherwise, what's the point? This all looks like a lot of fun! Congrats on being goofy!

Great job, Allison! That looks tough, but fun. Love the CAR gear. I hope you are enjoying your rest. You deserve it!

Glad you had fun! This looks like an amazing experience. Definitely once-in-a-lifetime. I can imagine that being out on the course for over 5 hours would get exhausting. Especially the day after a half marathon. Nice job on finishing holding hands!

you're an ultrarunner in the making. YES I SAID IT!

I DIDN'T KNOW YOU COULD RIDE THE ROLLER COASTER!!! Dang! Well, I guess there's always next year :)

Awesome job Allison tackling 39.3 miles over two days! Love that you snuck in for a quick roller coaster ride and kept going! haha

I swear the Disney races are the best!! Bummer the Incredibles weren't out when you had your costume on. ARGH! Love the pics and that you had such a great time!! Riding a Roller Coaster in your marathon is hilarious!!!

ohh now i need to do goofy! i would do it exactly like you did, it looks like an absolute blast!

That looks so fun, would you do it again?

This race sounds like it was such a blast!! I am so happy for you and your accomplishment! And that is totally awesome about riding the roller coaster -- seriously, in the middle of a marathon. You rock!

Congrats! you must have legs of steel to run all of those miles in one weekend!

Totally adorable. Looks like SO much fun, from the costumes to the roller-coaster ride (which is really unbelievable)! Congrats on all those MILES, girl—you deserve the self-imposed running break!