1. If for some reason it wasn't clear from my race reports, I would highly recommend everyone do the Goofy Challenge.  Disney runs an extremely organized race and the on course entertainment was second to none. I can't imagine doing it as a race though, I definitely think it is far better as a running experience.  That being said, I don't see myself signing up for any more Disney races in the future or heading back there year after year (from the number of people I saw in race shirts from previous years, the Disney races have a loyal following).  So far I've avoided repeating marathons because I feel like if I'm going to run that far I'd like to have some different scenery. I can only imagine that the experience at Disney would be similar year after year.  And since I wouldn't be trying to improve on a time, I don't know that I want to repeat that (somewhat pricey) experience.

2. Right now I am just about halfway through my self imposed run break.  After jumping straight into Goofy training after the Philly marathon, I knew that I needed to give my legs some time off.  I actually felt surprisingly good in the few days after Goofy, but I'm sticking with the plan because I know it's the smart thing to do.  I'm already looking forward to getting back to running, so that can only be a good thing.  In the meantime I'll be pool running, elliptical-ing and doing lots of laps to get myself ready for a fast swim leg at Kinetic.

3. I realized last night that with the addition of the Newtons to the rotation, I will have a lot of shoes to choose from when I go back to running. 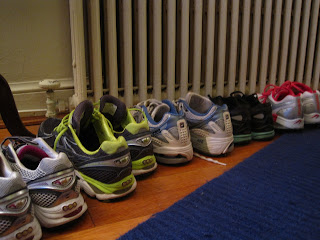 Just try not to injure yourself getting on and off the eliptical...that will be the real challenge ;)

Great shoe corral! I often ponder the Goofy prospect but the $$$ + the fact that my kids aren't into Disney kind of kills it for me.
You are wise to rest.

I agree whole-heartedly with #1. Amazing fun time. Disney is the bomb.

Enjoy your recovery knowing all the shoes that are waiting for you to demolish them upon your return!!

you shoe lineup looks remarkably similar to my own. :)

Hardest thing about not running - the unused shoes, calling out to you.

Eh, I think you actually need another pair. Maybe 3.

I'm glad to hear that Disney puts on a good race. I didn't really feel that way when I did it, but that's probably because they were still doing both the half and the full on the same day and that was one big nightmare. Maybe I revisit the idea soon?

How are you supposed to be a serious runner when you only have shoes for 5 days of the week? Sigh.

Congrats again on The Goofy weekend. It makes me happy to read about runners taking a break, too. Smart! And you know you'll come back rarin' to run!

Enjoy the break - you'll be back at it in no time!

i agree, i usually don't do long races more than once. I know a lot og people like to do them every year...but I want to keep switching it up, there are just so many out there!!