Goofy race weekend started on Friday with a trip to the expo. 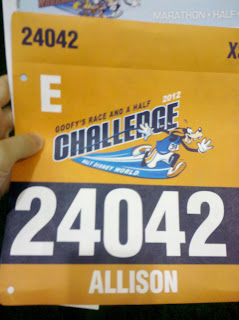 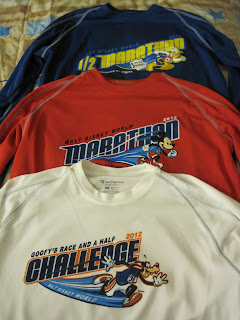 I managed to escape without making too many purchases.  Just a nice race memento... 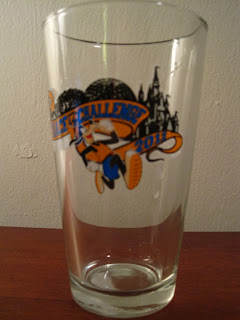 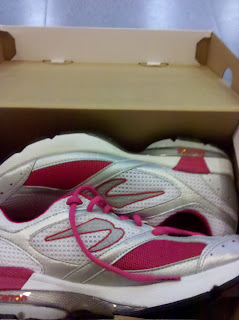 On Saturday morning my alarm went off at 2:30 and on the first bus (3:00) over to the start/finish area at Epcot.  I hadn't been sure how early I needed to get there or how crowded the buses would be.  I ended up at Epcot at 3:15, which led to a ridiculous amount of waiting. I sat around for a while.  Finally shed my warm up pants and checked my bag around 4 (I had a throwaway jacket) and then stood around some more until they let us start the walk to the start area around 4:30.  The walk took about 20 minutes and then there was more standing around in the starting corrals until the race started at 5:30.  Thanks to my Philadelphia Marathon time I was able to move from corral E to corral B, so I was running pretty quickly after the elites started.

I had been debating for a while how to run this race.  I knew that slow was safe, but I was also tempted to go after my PR.  Although it's less than a year old, I feel like it's relatively soft (1:59) given that in Philly I ran two 2:00 halves back to back.  I thought that I could probably run comfortably at a 9:00 minute pace and finish with a new PR.  However, I knew that if I was going to miss a PR, I wanted to miss it by a fair amount.  Finishing in 2:00 or 2:01 would earn me nothing and would be too fast to be considered super easy.  I decided on Friday that I would see how I felt in the first few miles of the race and make the call.

I started around 9:30 pace and dropped to about 9:15 in the second mile.  When I tried to drop the pace again in mile 3, I realized that my legs weren't having it.  While 9:20-9:30 pace felt really comfortable, that jump down to 9:00 was going to require more effort than I was sure I wanted to take on.  I knew that to make up for the slower than 9:00 pace in the first two miles, I would have to get into the 8s at some point to PR.  I could see myself struggling and then finishing in 2:00.  I made the decision right then to back off and stopped looking at my Garmin.  I was going to do exactly what I said I would in my goals post, stop and take pictures and enjoy myself.  After making this decision I immediately felt relieved and knew that meant I was doing the right thing.

Since the race started so early, it was still dark for the first half, so I didn't see the point in stopping for character photos.  I also knew that the marathon didn't get to the Magic Kingdom until mile 11 or 12, so I figured I'd save those pictures for the next day when it would be lighter. 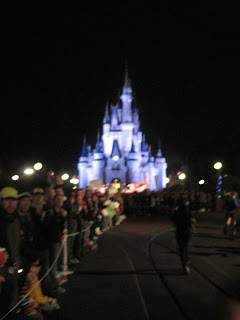 But I had to stop for pirates! 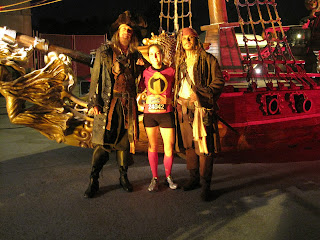 The sun was starting to come up as I left the Magic Kingdom and there were plenty of characters out as we ran past the fancy resorts near the park and back onto the highway to Epcot. 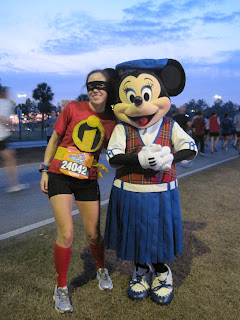 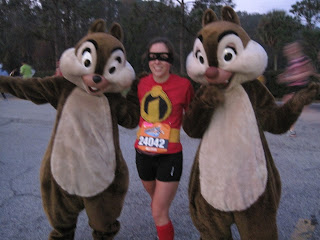 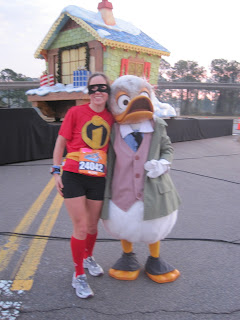 Then I was back in Epcot and it was a short dash to the finish line. 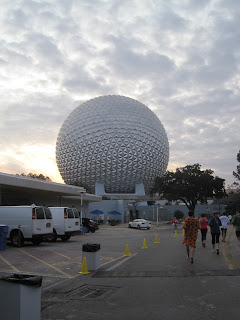 That's a barefoot Fred Flintstone ahead of me
I finished in 2:08:29, which was fine with me, and picked up my special 15th anniversary Donald medal. 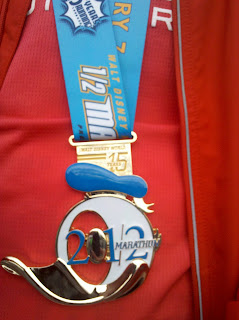 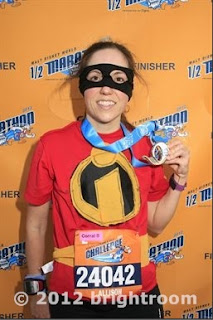 Then it was back to the hotel for a quick nap while my friend Katherine and her husband headed to the expo to pick up her marathon bib and then we headed to Epcot for the afternoon.  My quads felt a bit sore, but other than that I felt pretty good.  And lots of walking is the best thing to do between races, right?
Posted by Allison at 6:11 AM

OMG I love that you dressed up!!! That 15th anniversary bling is awesome too... Good job making the call to run it easy... now on to the marathon...

bahahahaha YOUR COSTUME IS AMAZING

Great job, it looks like such a good time!

1. Thank you for not doing the whole weekend in one post!

It really was the perfect costume. Such a good call to back off and enjoy it too!

Your outfit is SUPER CUTE! Slow and taking pictures was such the right call.

This looks like so much fun! Considering your goal was to HAVE FUN- you nailed it and who cares about the time!? Congrats on running smart and saving some energy for the full!

I love your costume!! So awesome! The medal is awesome too! Can't wait for the next part.

Congrats! The key to Goofy is to relax and enjoy it :) I did my race report with a video this year, check it out!

fun! sounds like you made a smart decision. can't wait to hear about the big one!

The pictures are a way better end result than a PR. I love them.

How cute are you in your costume? Congrats on a great race!

SO SO FUN! Congrats on the Goofy success - it looks like you had an amazing time!